A talented young man descended from the Dinmore Nunn family went on to become one of Australia's premier footballers. He was no bunny in front of the goal.

There's a head for every hat worn

The above came to me as a saying and I submit I may be the first to publish it.

Nev Deakin on his Nunn grandparents, his mother’s siblings and fishing on Rockhampton's Fitzroy River.

Nev Deakin, the second son of Fred Deakin and Arthur and Helen Nunn’s eldest daughter, Annie, remembers clearly when his grandfather took ill and died in 1943.

It was a time of upheaval for the Deakin family and for Arthur and Helen too.

They were living in flats at 121 Kent Street after Arthur and Helen had moved back from Brisbane after having lived for a time with Chrissie and Eli Peters at Wooloowin in Brisbane.

Nev recalls that when Arthur and Helen—who was known as Ellen—first moved to Bluff between 1906 and 1909, Ellen sold vegetables at a stall.

As well as the vegetables, Ellen also brought others in to sell. Arthur worked at the Bluff Colliery, six days a week.

When the family moved to Rockhampton, probably around 1915, Ellen managed a boarding house in George Street, called the Tower House. 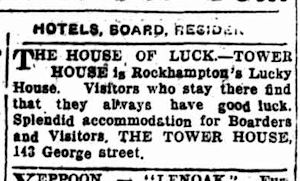 The family later settled at 51 Kent Street. Arthur worked as a gardener for the Rockhampton City Council.

Nev says Arthur used to cut grass with a scythe in a most proficient manner. Arthur loved to fish and took many of his grandsons with him when he went out on the Fitzroy River.

No doubt he picked up these skills as a boy living on the banks of the Bremer River when the family lived at Dinmore, on land where the Australian Meat Holdings processing plant is now situated. Ellen did not care too much for fish and was loath to cook “the smelly things”.

In reflecting on those years, Nev fondly remembers his maternal grandparents at Kent St, Rockhampton.

He was particularly fond of his grandfather Arthur. Nev says that in 1937 a fire at two businesses in East St, Rockhampton, provided his grandfather with materials for building a punt.

Williams Hardware Store and Fostar’s shoe store got burnt out and they opened it up for people to come in. They pulled all the shelving—1 1/2 to 2 inch pine. He bought a heap of this shelving and decided to build a punt out of it. Then we’d go fishing on the river. He built the punt and showed us how to do it and we helped him with the corking. We went up the river with the tide and soon as the tide turned, we'd start back. He could row all day. We used to tie the boat up near the old St John's Hospital (Tannachy Rocks). It used to be tied up with a chain and a lock. One day we went down and it was gone.

The relatively short walk to the river sometimes included a stop at the hotel where Arthur would buy a bottle of cold lager and a cigar.

He wasn’t allowed to drink (at home) and he had minerstitus (correct term is Pneumoconiosis) and he wasn’t supposed to smoke. He’d drink his bottle of lager and puff his cigar all day. He’d bring the fish home but Ellen wouldn’t cook them. ‘Don't bring that stinking fish in here’, she'd say. We’d sell all the catfish to the Chinaman for a shilling each. They used to have a fish called the golden king; they were a beautiful fish. But I talk about to fellows today about golden king (perhaps it was a golden perch) but they don’t know what I’m talking about. They weren’t a big fish and they had this golden fleck through their scales. We used to go right up the river to the Six Mile or the Twelve Mile depending on how the tide was running. We’d catch all sorts of fish up there; we’d get a barramundi now and then. I remember as a kid loving old granddad Nunn, he was such a gentle old fellow and always ready to teach you to tie your hooks on properly.

Arthur grew vegetables on the adjoining block of land which he also owned and was “always in the vegetable garden”. Nev added:

There was a garage which housed Aunt Chrissie’s car and there was a chook pen. He was a bloke that could do anything; he made us a cricket bat out of silky oak, one time—it was beautiful and it used to stand up to a hard ball too.

On his grandmother, Ellen, Nev describes her as a very stern woman.

I always thought she must have had a very hard life. We weren’t allowed upstairs, of course, we were allowed up the back steps on to the landing, weren’t allowed inside the house. She always seemed to me to have a chip on her shoulder with him (Arthur). At the front of the house they had this orange tree growing near the steps; it always seemed to have oranges on it. We tried to grab an orange but should would appear and say: ‘Don't you touch those oranges, you kids’. We were really frightened of her, she was a real dragon.

But his mother’s eldest sister Chrissie was a delightful person:

I always remember about the car she had; you know, nobody had cars in those days but Chrissie had one. She was a real character, particularly after she moved to Brisbane. She had that little shop where she used to sell sandwiches. I was there one day (I was a young fellow) and I walked past the bedroom door and she was sitting on the edge of the bed putting on her stockings and she was pulling the stockings up her legs; and I just walked past and happened to glance in and thought ‘fancy Auntie Chrissie doing that’ and she said: ‘Not a bad leg, hey’. I thought; ‘boy, Auntie Chrissie’.

Of his mother’s younger Jessie:

Auntie Jessie was a nice person; she was a bit ‘religious’ as I always thought. Dave (her husband David Collins) was a quiet old bloke. She was one of those people you wouldn’t get too familiar with but she had a sense of humour, she was nice.

Another aunt, Emily, held a special place in Nev’s heart and he described her as a soulmate.

She used to love tennis and I used to love tennis and they used to come a stay at our place sometimes. We went a saw her in Townsville some years ago. We walked in on her one day and she got such a surprise; she was just the same old Emily. We used to sit and play cards. They used to say; 'poor old Emily, she'll never make old bones'; and she lived the longest of them all.

I remember Rex with the hose the day the milkman came. He had this hose rigged up under one of the steps; this milkman was always giving him a bit of a razz. Rex said: ‘I’ll let him go up the steps and when he comes down, I’ll get him’. When he got him, the milkman chased him.

And then there was his uncle George, Arthur and Ellen’s son:

George was a great fellow, he was like his father. I respected him because he worked in the railway all those years amongst those blokes and he was never like them; he wasn't a swearer or didn’t run people down; didn’t drink or smoke, and conscientious. When I first went out firing (stoking the fire on a steam train), I went out with George (he would have been the train’s driver) and he taught me the tricks of the trade. He was so genuine. The other blokes would be trying to lose time, but never George, he was always concerned about running to time. He maintained the standard he set himself.

Chevington All Saints church in which many of our Nunn ancestors ...

From Hertfordshire to Australia *Following is a transcript of recollections that Henry Aldridge wro...

Rockhampton Nunns
Rex Newsome on his grandparents Arthur and Ellen...

How the village of Chevington was established By Warren Nunn Inside Chevington All Saints ...

Life at Boolburra (scroll down about half way for photo gallery) © Warren Nunn, oznunns.com. ...

Various letters have come into my possession mainly from my grandmother Isabella Dobbs (nee Silver)....

James Thomas Coker, embezzler © By Warren Nunn According to immigration records the Roya...

The rise and fall of education at Boolburra By Warren Nunn In 1874 when the railway bridge was...

Walter Nunn (second from right) with his wife Elizabeth Thompson (left) and family members. That...

22 December 1884. Inventory of the personal estate of the late Revd Alexander Silver. At Stonehaven ...

Desmond (Slim) Holland's murder   Desmond Holland.   ONE of David an...

Building a life in Australia James Silver and Janet Todd. When a young Scottish carpenter ...

This is a transcription of the divorce proceedings between Henry Coker and his first wife, Frances. ...

Dobbs family
Growing up at Boolburra

Ray Dobbs: How I remember my growing-up years Ray Dobbs. ...